I spent six weeks of last December/January in my hometown. It was the first Christmas without my father, and it was cheap to stay, so I went back. It was my first time back in Pittsburgh since I’d moved away from the only place I’d ever lived.

The trip was incredibly emotional for many reasons, but one of the best was when I decided to walk down the street to get a pizza. I had to wait ten minutes for it to cook, and so I decided to open up my web browser. Then I saw this:

You see, I’ve always had a complex relationship with _why. I had been dabbling in Ruby when he was still alive, and planned on dropping by this ART && CODE thing I’d heard about over at CMU, but I was out of town that weekend, so I shrugged and didn’t think twice.

I started looking into _why and what he was actually about. What I found was amazing, and you already know that part of the story. I thought Hackety Hack was a masterpiece, and decided to help maintain it. Unfortunately for me, nobody else did. I hadn’t done a whole lot of open source work before, and now I was maintaining a big, important project by one of the most well-known Rubyists of all time. Whoah.

I cared about Hackety enough and felt inspired enough by _why that I actually quit my startup to spend more time working on it.

Here’s the weird thing about someone disappearing: you can’t ask them questions. I had so many things that I wanted to ask, so many unresolved questions, so much I wanted to know. It’s really weird to take someone’s life’s work and make it your own. I spent a lot of that first year with crippling doubts about what I was doing, if _why would like it, if that even mattered, wondering why he’d abandoned something so important, why he’d abandoned us. And I felt terrible that I needed this from him. Why does he owe us all that? Who am I to impose?

So I marked my calendar for the 18th, and waited. That was yesterday.

It was… great. Just great. The stuff _why sent is basically everything I’d ever hoped. It’s got so much buried inside. An IF game, commentary on Jobs vs. Gates, a very person struggle with identity, a comment that he likes what we’ve done… it’s great. And it’s finally brought me some closure. 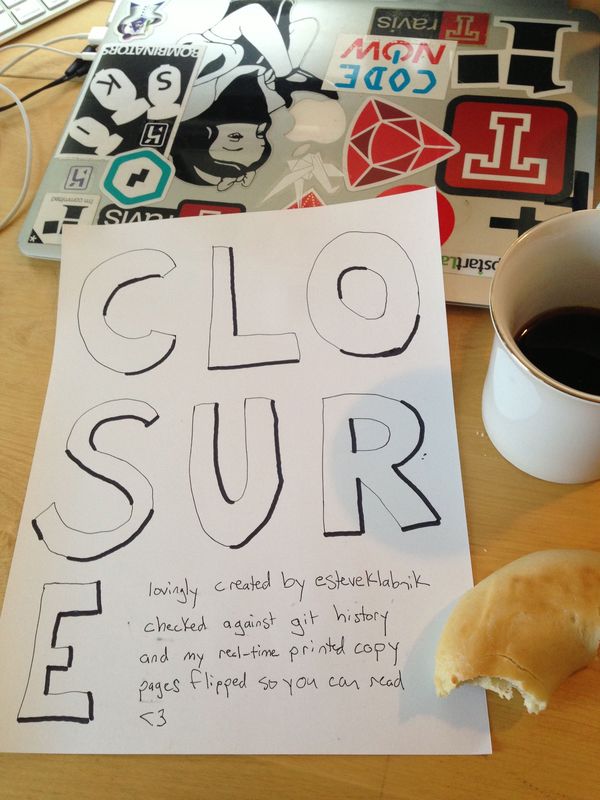